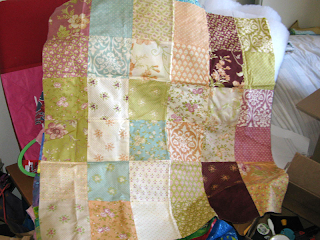 I was in my sewing chaos, sewing a quilt block for the first person in the online Quilting Bee I joined, when I realized I'd need some scraps of my own. Once I started poking around in my scrap bag, I found that I'd stuffed several unfinished quilt tops and a few unfinished other sewing projects in there as well.

The pastel one I show above is, well, not my style at all. I don't do pastels - they seem colorless to me. I'm much more into the brights. 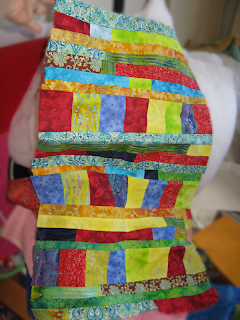 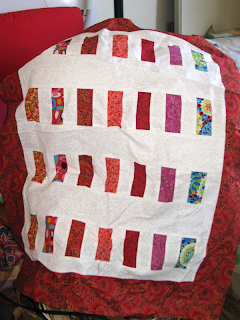 These are more my style, but they're both unfinished. Well, the second one is closer. I could, at this point, slap some edging on it, back it and quilt it. It's a bit small, but it could be a cute baby sized quilt. I don't know any babies right now who need a bright quilt.

Now that I think about it, though, I do have a friend who's going to have a baby girl soon. I am planning on making the baby a pretty pinks and browns quilt - maybe her older sister would like this quilt if I made it a bit bigger. (I would have the added benefit of having finished another old project!) 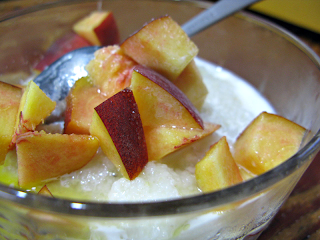 I'm working on eating better and exercising more. I've been trying to lose weight for quite a while now and haven't gotten anywhere. Now I've signed up for a government website to track my daily exercise. Since it's public, I have to do the cycling every day or it shows! I did six miles at a hard push today and I'm hoping to get 12 in tomorrow.

Anyway, this breakfast is grits with some peach and a little butter and milk. Yes, those aren't low fat, but I'm counting calories rather than obsessing over every fat/sugar/carb I eat. It lets me eat a wider range of foods without having to feel deprived. I just eat less OF the higher calorie foods. 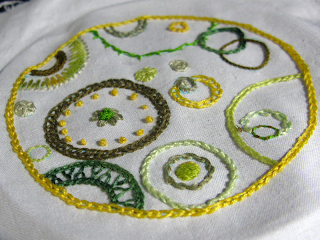 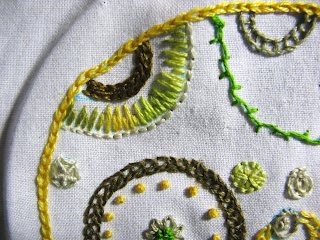 I've also been embroidering - I worked on this while in New Hampshire. I don't think I'll sell the pattern for this; it was just to be some fun with different stitches. I'd like to do something with it, though. What if I framed this and then did other geometric shapes - so one all squares, and one hexagons?

SongBird
Posted by SongBird at 12:33 AM

SongBird
Alameda, California, United States
I'm always busy - usually making something. I love knitting, sewing, drawing, writing; there are very few creative things I haven't tried. I have a teenaged daughter, a funny and smart life partner, two silly cats and a backyard with hummingbirds. What more could a woman want?

What I've had to say