I've been doing a lot, and even taking pictures, but not posting about them. 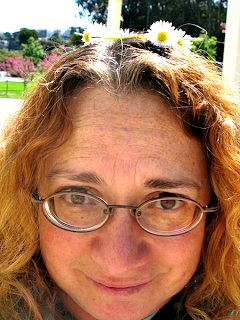 Many of the things I've been up to are small, and somehow it seems pointless to post just to say that yes, I've put off the laundry again, and I've finished one small bit of embroidery, and the teenager is being, well, a teenager (and therefor annoying), and in other (non) news, I've been cycling several times a week and not lost any weight. 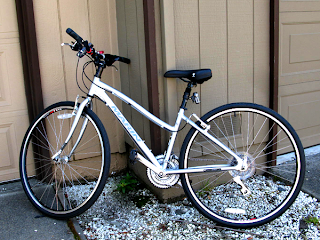 My daughter, who's 17 and variously stroppy in random ways and at random times, has mastered the art of the Passive Aggressive Note: 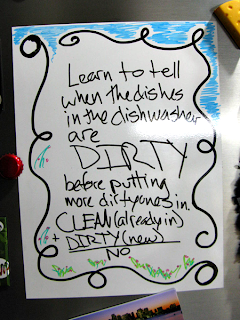 I think I should be proud of her. What do you think?

I've been practicing with my spinning wheel - 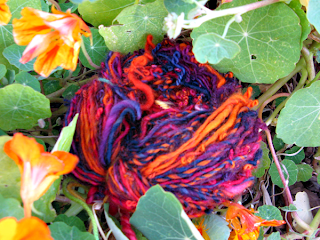 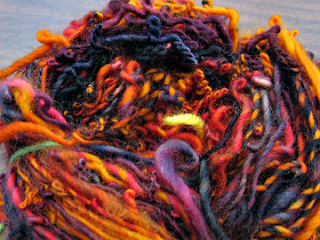 I also finished a handmade book with felted cover for a friend in Australia! I enjoyed the sewing, and now I want to make one for myself. 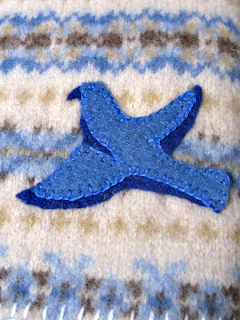 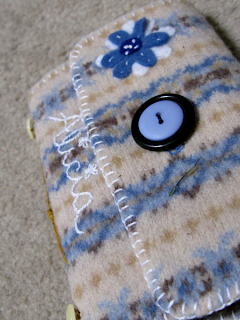 I also made her a scalloped garland - I do hope she likes the bright colors. I know I do - I'm certainly making several more for myself. 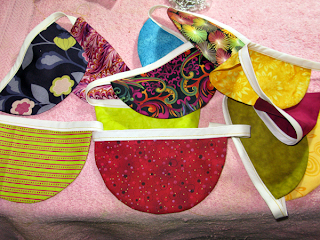 My backyard has started to produce pretty things! I planted the bulbs for these a couple of months ago. I also have an amaryllis, and some daffodils. 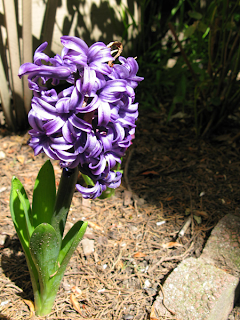 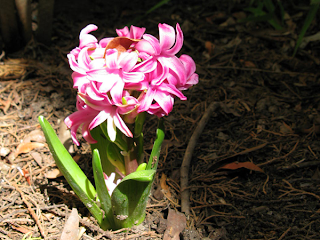 One of my pairs of jeans got a hole in the knee, so I made some cute half-inch hexes and put them on. I thought they needed something to balance them out, so I put two on the other side, up near the pocket. 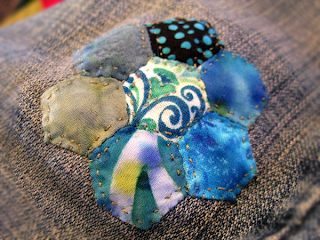 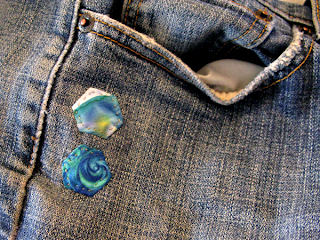 So, since I'm hungry and I haven't eaten much today, I'm going to go see if I can find my kitchen. I'm sure it's where the dishes are - maybe I'll even get some of them washed. The question is, will I get them washed and then forget to eat again? I'll leave you to ponder that and gaze at the pretty, springlike daisies I've found everywhere. 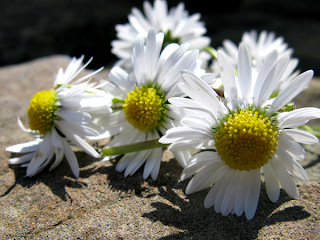 SongBird
Posted by SongBird at 1:35 PM No comments:

I've promised myself I'm going to be better about this, and I keep not pushing myself about it.

I will cycle every day. Around the island I live on is 6 miles and mostly flat. Most of it is quite pretty, even with the horrible headwind off the bay. I made it today - 6 miles in 35 minutes. Tomorrow I'm going to do it again. Friday also, but Monday, I'm going to see if I can make it one and a half times around. If I can, I'll give myself two days at that level, then see how much further I can go. If I'm going to get stronger and lose weight, I'm certainly not going to do it sitting on my (ample) butt.

I was actively rolling at 11:30 and I made it home at 12:05. Not bad. Plus, I didn't coast. Well, I did coast over the spots which are so bumpy that sitting on the seat and pedalling will make your crotch get up and leave you forever, and I coasted past the sweet little old lady pumping along on her walker. Plus, I had to wait for a second cycle of the light at the one intersection with a light. I'm not great at starting off. *facepalm*

Then, once home, I swept up the back yard. I haven't put all the sweepings into the greenwaste bin. I might decide to be lazy and ask Geordie to do it. *is lazy*

I should go take a shower now!

I went shopping yesterday at Keepsake Quilting, and its sister shop, Patternworks. I got, well, lots of things. I also went to The Elegant Ewe, for more locally sourced yarns.

Tomorrow, we're going to see what's up north. I've been to a few places in northern New Hampshire, but it was snowing and dark, so I didn't actually see much. I've heard it's really pretty and I'd love to see it.

I've taken pictures of the Boston Aquarium and other local pretty places - I'll try to post those as well.

I hope everyone's having a good week.

Yesterday we went to a yarn store in Concord. One of Geordie's friends that we're staying with does counted cross stitch. She saw my folding scissors and coveted them, so I stopped into a shop to get her a pair of her very own. I also got some locally spun and sheeped wool, and some local alpaca. Yay.

Then to Lake Winnipesaukee for breakfast. Union Diner is quite good - it's in Paugus Bay. Onward to Center Harbor, where a couple of the larger yarn and fabric companies are based. I'd have taken pictures, but they had signs saying photos weren't allowed. Suffice it to say they were all nice and large. The quilting shop half was more like a very large and well stocked local quilt shop; the knitting store was, well, less interesting. It had commonly available yarns at regular prices. I bought a yardage estimator card and some yarn made from milk.

I know. Milk is a liquid. I got two balls of the Eclipse color. Here's information about how it's made. Cool, huh?

I got fabricy things at the quilt half of the company. I got some fat quarters of fabric, some die cut pieces (I got butterflies and some pre-cut hexies) and a couple bags of pre-cut 10" squares.

I'll take pictures tonight to show you everything.

SongBird
Posted by SongBird at 8:16 AM No comments:

I've also stopped into one of the local craft stores. 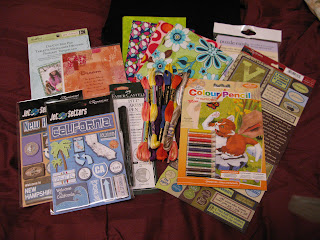 Not a bad haul, all things told.  I'm hoping to use the book titled 'Dreams' (it's an empty dollar photobook) to make a quick scrapbook of the trip.  I can't print pictures yet, but I'm trying to collect lots of memorabilia to fill pages.

The colored pencil by numbers is an easter gift for my daughter, who used to love paint by numbers.

On the first day we were here, we went to a local farm which serves a lovely fresh breakfast with all sorts of different flavors of pancakes.  (Cornmeal was especially tasty - I have made it with blueberries at home.  NOM.)  They have a small petting zoo outside in back, for little kids, and my 17 year old daughter spent every quarter between the five of us on the goats. 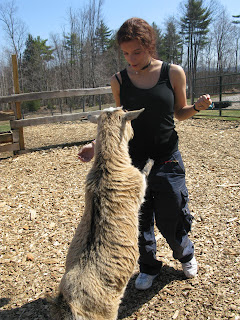 The goats were very appreciative!!

We're going to Boston tomorrow, to go to the aquarium and see a friend of mine.  I'll take pictures and see if I can't get them up for you.

Have a great week.

SongBird
Posted by SongBird at 8:13 PM No comments:

I haven't done much creating this week.  I've been overwhelmed with cleaning and organizing.

A friend is coming to stay for a couple of days, and the spare bedroom is the craft room as well.  She won't mind some clutter, but currently, the bed in the room is, well, covered in non-bed things.  Like, you know, cut quilt pieces and some boxes of, erm, stuff.  I've spent lots of time in the room trying to get organized, but it's gone slowly.

This is compounded by the fact that we're going away for a week, starting tomorrow night.  We'll be back on the 10th, but she's coming the night of the 12th and I'm not sure I'll be ready.

However, I've found several projects in the room that were one task or row from being finished, so I've made sure to <i>finish them</i> instead of just setting them aside.  I've managed two crocheted tawashi scrubbers, a felted pillow cover, and several other small things.  It feels really good to have finished something!

Right now, I'm sewing snaps onto a sweater, so the buttons I love, which are too big for the holes, can be sewn over the holes and I can still close the sweater.  It's a sweater that I got for about 4 bucks at Goodwill, years ago.  It was an awful, boring, ugly beige, but it didn't matter, because it was wool and I just needed something warm.  Recently, I dyed it a pretty dark olive - it's quite nice now.  The dye left it a bit splotchy, but I like the way the swirls and speckles look.  I'm putting loads of time and effort into it, but it's going to end up my favorite sweater, I can tell!

Once I'm done with the snaps, though, I'm going back upstairs to start boxing up the craft supplies I don't have time to sort and store correctly.  I've been trying to actually go through the supplies and organize them rather than just boxing them up willy-nilly, but I think it's time to just hurry up and box.  *sigh*

I've tried to add some pictures to this post - I've taken several pictures while I've been out running errands, but it keeps telling me the server is rejecting my pictures.  I'll figure that out soon, I promise.

SongBird
Posted by SongBird at 9:16 PM No comments:

SongBird
Alameda, California, United States
I'm always busy - usually making something. I love knitting, sewing, drawing, writing; there are very few creative things I haven't tried. I have a teenaged daughter, a funny and smart life partner, two silly cats and a backyard with hummingbirds. What more could a woman want?

What I've had to say